Close to two years ago, costing $333 was an initiative for me to get back in touch with music. I bought a cajón (pronounced ka-hone) which I brought it out for regular gigs at the former White Tangerine Cafe situated at the Paya Lebar-Kovan CC. In case you do not know what a cajón is, it is a Perunian drum box, meaning ‘crate’ in Spanish.

After just a few months, I found some crack lines on my cajón. I couldn’t see the crack lines for they were at the inner side of the cajon, but the lines felt deep. I thought that it was me mishandling my cajón as I transported it putting it in a different orientation in my car. I thought I might have jammed the breaks too hard at one point of time and had cracked the cajón in the process.

With the closure of the WhiteT Cafe just months after, I locked the cajón up in its usual bag and stow it on my cupboard.

A recent jamming session with my sister had me open up the bag a year after and I found severe crack lines on the outside of the cajon with pile of wooden dust found in the bag. It seems that the crack line deteriorated even though I tried to store it as best as I could. I consulted my brother-in-law, a music enthusiast and a songwriter like me regarding the issue.

“Its what?” I asked again. I couldn’t hear what he said for the first time

I’ve never heard of woodworms before. Sounds bad. As bad as termites. From the way my brother-in-law described it, it sounded worse. He advised me to try and “Baygon” it, to “fumigate” it with insecticide.

The very first thing I did the next morning was to bring my cajón down to the void deck and spray it with loads of Baygon. I was expecting the woodworms to climb out but it didn’t.

Until that night, I spotted three dark beetle-like creature lurking in my cajón. So those were the culprits.

The next morning, I left for work, leaving the cajón outside my house. The same evening when I returned from work, my Mum said that I had to throw my cajón away. She heard the sound of woodworms eating up my cajón in the morning.

And she wasn’t exaggerating. I heard it too.

What else can I do? It would have been too much of an effort to buy and apply woodworms pesticide treatment on the cajón.

Here’s a term we often used in the military. I got to “BER” the cajón (ie. the cajón was Beyond Economic Repair and was to be written off) 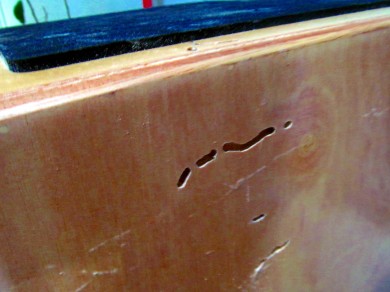 The next day, my parents brought the cajón down to the dumpster on the way to the supermarket. The cajón was taken away from the dumpster and they went passed it on the way back.

I hope the new owner knows what he is doing…